From the seemingly endless sand dunes of the Namib Desert to the tropical wetlands of the Caprivi Strip, Namibia is a country of epic landscapes, prolific wildlife and few people. A Namibia holiday will offer you an unforgettable experience, which will capture your heart. It's a very different world and definitely a country for touring.

Towns and cities are few and far between in Namibia. Even the capital, Windhoek, is not much larger than a medium-sized British town. But the city's lively nightlife, colonial architecture, thriving restaurant scene and excellent beer make it a pleasant place to while away a day or two before heading off to discover its deserts, seascapes and wildlife.

One of Namibia's highlights is Etosha National Park, whose main characteristic is a saltpan so vast it can be seen from space! Yet, there is abundant wildlife that congregates around the watering holes, particularly during the dry season. Etosha's centre is known for its huge elephant population, while zebra, blue wildebeest, springbok and gemsbok also roam the plains. Lions are also common and black rhino can also be found in the western regions of the park.

Namibia's remote northwest is undoubtedly one of the wildest and most spectacular parts of Africa, particularly the eerie Skeleton Coast, where the world's oldest desert, the Namib, meets the Atlantic Ocean. The landscape presents miles of white shimmering sand with the odd glimpse of a shipwreck jutting from the deserted beach or above the crashing waves as the sea ebbs and flows.

Damaraland is one of the most scenic areas in Namibia. A huge, untamed ruggedly beautiful wilderness where flat-topped mountains, khaki plains and desert-adapted wildlife and people abound. Highlights of Damaraland include The Brandberg, Namibia's highest mountain; Twyfelfontein, a wonderful rocky outcrop with thousands of rock paintings; and the Petrified Forest, which is millions of years old.

The coastal town of Swakopmund, with its palm-lined streets, seaside promenades and German colonial atmosphere offers an escape from the heat of the desert as well as an insight into the country's culture. Close by is Walvis Bay, whose scenic feature is a wide lagoon which is one of the most important wetlands of southern Africa and the hibernation area for thousands of migratory birds.

Another scenic highlight of Namibia is Sossusvlei, a huge clay pan encircled by giant red sand dunes considered to be the highest dunes in the world. The best time to view Sossusvlei is close to sunrise and sunset; the colours are strong and constantly changing.

With all this and much more besides, Namibia provides one of the great travel adventures, so let Premier Holidays create the perfect Namibia holiday for you...

Call and speak to one of our travel experts who have experienced Namibia personally.

The most popular way to visit Namibia is as an extension to a South Africa holiday. Windhoek is approximately 14 hours from the UK flying via Johannesburg.

Partially covered by the Namib, one of the world's driest deserts, Namibia's climate is generally very dry and pleasant making it a year round destination. Inland, all the rain falls in summer (November to April). January and February are hot, when daytime temperatures in the interior can exceed 40ºC, but nights are usually cool. Winter nights can be fairly cold, but days are generally warm and quite nice. June to August are considered best for game viewing. September to October/November is warm although there can be a lot of airborne dust. 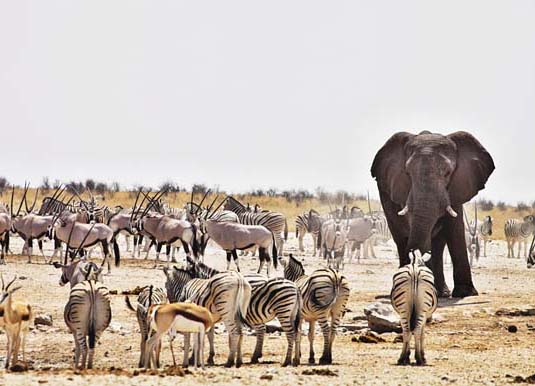 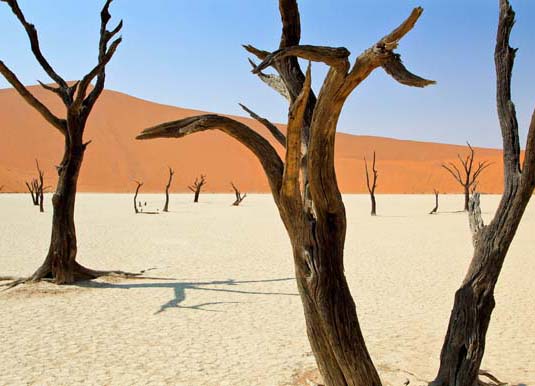