A symbol of world peace

he attractive city of Hiroshima will, of course, forever be remembered for the events of the 6th August 1945 when it was destroyed by an atomic bomb. Great efforts have ensured the rebuilding of the city and despite its tragic past, a visit to Hiroshima will not be a depressing one, as a vibrant metropolis has risen phoenix like from the ashes.

The Peace Memorial Park is a must-see in Hiroshima. A large leafy space bordered by rivers on both sides, the park is criss-crossed by walkways and dotted with memorials. The central feature is the long tree-lined Pond of Peace that leads to the cenotaph, a curved monument engraved with the names of all the known victims of the bomb. You'll also see the A-Bomb Dome, one of the few buildings to remain standing after the bomb exploded and now a UNESCO World Heritage Site, it is a tangible link to Hiroshima's unique past. The Peace Memorial Museum can also be found here, which serves as a constant reminder of events back in 1945 and whose displays include many personal stories, which while upsetting does embody the feelings of real people. Also of interest are the Children's Peace Monument and the Flame of Peace.

Within the city, other attractions include Hiroshima-jo, also known as Carp Castle. Originally constructed in 1589 and then rebuilt in 1958, the five-storied keep is surrounded by a moat and has an informative museum on Hiroshima's and the castle's history, while panoramic views of the city can be enjoyed from the top floor. Shukkeien Garden has a long history dating back to 1620 and is incredibly scenic, with valleys, mountains and forested represented in miniature within the garden's landscapes.

Less than an hour from the city is Miyajima island, most famous for its giant Torii gate, as at high tide it gives the appearance of seemingly floating on the water. It is considered to be one of the country's most iconic sights. Also on the island is the Itsukushima Shrine, whose red colour and surrounding graceful scenery are quite simply stunning, particularly in the morning, or evening when the shrine is lit up.

The most popular mode of transport in Hiroshima is the iconic streetcar (tram). The Hiroshima Electric Railway Co offers an electric range of trams manufactured across Asia and Europe, earning it the nickname "The Moving Streetcar Museum". Many of these were donated to the city during the rebuilding after the atomic bomb.

Hiroshima has a bustling downtown area whose main thoroughfare is Hondori Street, a pedestrianized area lined with shops and restaurants, while in nearby Aioidori Street there are a few large department stores too. Whilst in Hiroshima, take the opportunity to try the local speciality, okonomiyaki – a savoury pancake which is traditionally a mixture of cabbage, bean sprouts, pork, egg and noodles.

Call and speak to one of our travel experts who have experienced Hiroshima personally. 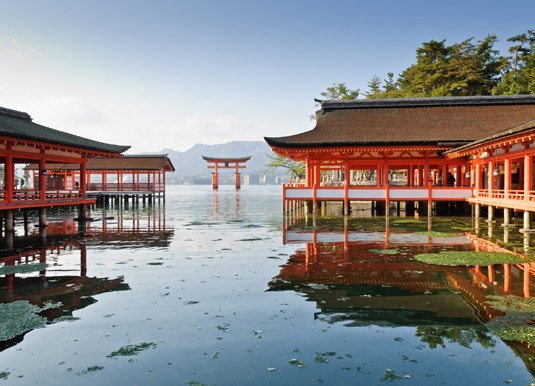 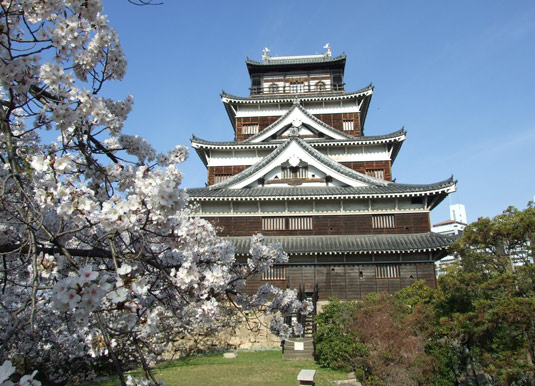 Where to stay in Hiroshima

Hiroshima is approximately 2 hours from Kyoto by shinkansen bullet train, while train journeys from Tokyo to Hiroshima take around 4 hours.

As with much of Japan, spring and autumn are the most popular times of year to visit, In March and April the cherry blossoms bloom are quite beautiful, while the temperatures are comfortable. During the autumn months of September and October countryside is very attractive with shades of red and brown. Summer sets in around May/June and so the temperature and humidity rises while rain can be expected in July and August. While winter months can be cold, there are less tourists and it can be a good value time to visit.

Most popular in Hiroshima