Once Vietnam's capital and seat of the Nguyen dynasty (1802-1945), Hue is one of the country's most important cultural and historical sites. This imperial legacy manifests itself today through the walled enclosures of the ancient Citadel, a UNESCO World Heritage Site, and a collection of tombs that dot the landscape along the beautiful Perfume River, which flows through the city.

On the river's north bank is the 19th century walled Citadel, a massive complex featuring hundreds of monuments and ruins, such as the Forbidden Purple City, once the residence of the royal family. Sadly, much of the Citadel was destroyed during the French and American wars, but nevertheless what remains is totally fascinating and well worth exploring.

Further insight to the past can be found amongst the numerous pagodas, tombs and temples that are dotted along the river, including the historic Thien Mu Pagoda. This distinctive temple stands seven storeys high with an octagonal tower, golden Buddha images at the base and is surrounded by graceful gardens. To the south and west of the city, are the seven Imperial Tombs, all strikingly different and architecturally outstanding, with most situated within attractive grounds.

A boat trip along the gentle Perfume River is an ideal way to soak up some of Hue's atmosphere whilst taking in some of the principal sights. Sit back and watch as an array of houseboats, sampans and dragonboats trundle along the river, whose name is derived from the blossoms from nearby orchards falling into the river and producing a unique fragrance.

Within a short drive of the city centre are the white sandy beaches of Vietnam's south central coast, which are perfect for those keen to combine sightseeing and relaxation.

Souvenir hunters should head to Dong Ba Market, close to the Citadel, where hundreds of stalls can be found as well as local food. There are lots of restaurants within the city, with some aimed specifically at tourists and others offering delicious local dishes.

Call and speak to one of our travel experts who have experienced Hue personally.

There are not any non-stop flights from the UK to Hue. The city is around an hour’s flight from either Ho Chi Minh City or Hanoi.

Hue has two main seasons, rainy and dry, with average year round temperatures of 29ºC. The dry season from February to May brings temperatures in the mid to high 20ºs, low humidity, less rainfall and warm sunshine. June to August brings the highest temperatures and higher humidity. The rainy season lasts from September to January when you can expect heavy downpours. 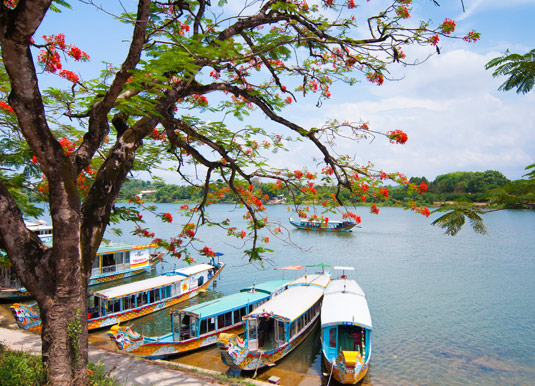 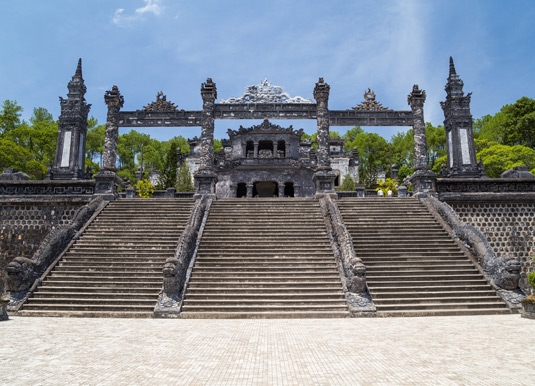