The tropical capital of the Northern Territory is a small yet cosmopolitan city, which sits beside a larger harbour, twice the size of Sydney's and offers plenty for travellers to see and do. Chairs and tables spill out of street-side restaurants, innovative museums celebrate the past and galleries showcase the region's rich indigenous art.

Much of Darwin's action happens along its revitalised waterfront, which is lined with restaurants, shops, sandy lagoons and parklands. Swim in the lagoon, fish from the wharf, dine alfresco on just-caught seafood, stroll past the waterfront mansions or trace the area's rich history in walking trails and public artworks.

History buffs can learn about the day World War II came to Australia at sites scattered across and around the city. At the Defence of Darwin Experience hear personal accounts of those affected, see original B52 bombers at the Aviation Heritage Centre and a variety of old airstrips in and around town along with ammunition bunkers that formed part of Australia northern defence line in Charles Darwin National Park.

The city's premier cultural attraction is the Museum & Art Gallery of the Northern Territory, which showcases fantastic exhibits including Aboriginal art. Other attractions include George Brown Botanic Gardens with plants from around the world; Bicentennial Park, which runs the length of Darwin's waterfront and Lameroo Beach; Crocodylus Park, for a close-up look at one of the world's most feared predators or Aquascene where every day at high tide hundreds of fish gather at the shallows by Doctors Gully Road in search of a meal.

Popular Mindil Beach Sunset Market, held every Thursday and Sunday between April and October, has around 200 stalls selling arts and crafts whilst musicians and street performers entertain. It's also a great place to sample a wide range of cuisine from the different food stalls. The Deckchair Cinema, is another much-loved Darwin institution, where a variety of films are screened every day from 6pm between April to November in a lovely outdoor location. Nature is well and truly part of Darwin's backyard – the famous national park of Kakadu is only a few hour's drive away. Additionally, just 85 miles from Darwin is Litchfield National Park with its 250 square miles of lush, monsoon forest, waterfalls, termite mounds and unusual rock formations. Alternatively, the unique Tiwi Islands are a boat-ride away and offer the chance to experience life in a modern-day Aboriginal community. Tourism to the islands is restricted and the only way to visit is as part of an organised tour from Darwin.

Call and speak to one of our travel experts who have experienced Darwin personally.

Darwin is approximately 17 hours flying time from the UK (including a stopover).

Darwin has two distinct wet and dry seasons. The wet season runs from November to April and is characterised by high humidity and monsoon storms. The dry season brings warm, dry sunny days and cool nights.

This afternoon tour is the perfect introduction to Darwin, with expert commentary from a local guide. Visit the Chinese Temple and Botanic Gardens before touring the city’s historic sites including the East Point Military Precinct, Mooring Basin and the Stokes Hill Wharf area. There is also time to explore the museum and Art Gallery of the Northern Territory home to some fascinating collections. Available daily (May-October) and Wednesday, Friday & Sunday (November-April). 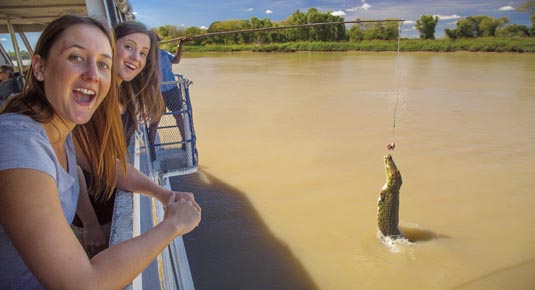 Join this afternoon tour and travel down the Stuart Highway to the Adelaide River. Cruise the river and thrill as awesome crocodiles launch themselves out of the water. Afterwards, continue to the Window on the Wetlands Visitor Centre for a view over the Marraki Plains. Later, it's on to Fogg Dam Nature Reserve for an up close view of the wetland eco system and the chance to spot birds and other wildlife. Available daily (April-October) and Monday, Tuesday, Thursday & Saturday (November-March) from Darwin.

Visit the main falls of Litchfield National Park and enjoy various scenic walks. Begin high above Florence Falls, then walk down the stairs to the plunge pool for a swim. Visit Tolmer Falls for a magnificent view of the water cascading down to the deep waterhole at the base of the falls, then Wangi Falls another relaxing spot for a swim. Finally, visit the Howard Spring Nature Park where you can feed barramundi and turtles. Available daily from Darwin.

This full day tour begins as you travel south to the Adelaide River, stopping en route at the Adelaide River War Cemetery. Travel on to Edith Falls for a swim in the waterhole beneath the falls (conditions permitting). After lunch, enjoy a two hour cruise through Katherine Gorge, where you may see crocodiles sunning themselves. Drive through Katherine and Pine Creek to the evening dinner stop (own expense). Available Monday, Wednesday and Saturday from Darwin.

This full day tour begins with a two hour cruise over to Bathurst Island. Join your local guide for a journey through the progressive, modern day Aboriginal community of Wurrumiyanga. Highlights include a visit to the museum, spending time with some Tiwi ladies as they weave and paint; sample local billy tea and damper with lunch. Available Thursday & Friday (April-May & September-November) and Monday, Thursday & Friday (June- August) from Darwin. 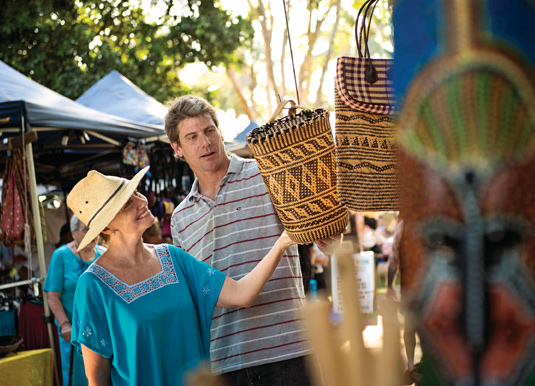 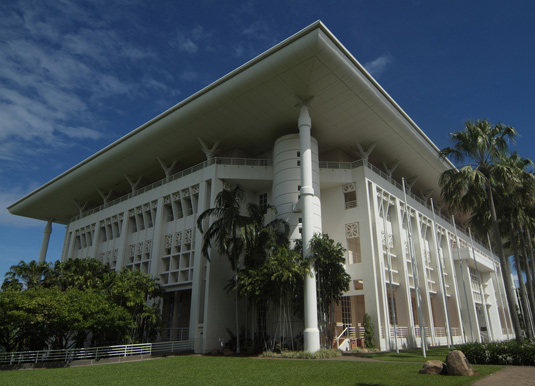