Located on the south western tip of North Island, the national capital has firmly established itself as a destination for visitors thanks to an abundance of arts and cultural events and an increasingly innovative culinary scene. Boasting an outstanding harbour and being surrounded by a rugged coastline and rolling hills means you get a vivacious inner city experience with scenery, nature, walking trails and vineyards on your doorstep.

Wellington's compact size means most of the major attractions are within easy walking distance from the hotels, restaurants and bars. On the waterfront you'll find Te Papa, New Zealand's national museum and a must-see. It's highly interactive, fun and full of surprises, with a rich collection of Maori artefacts, natural history and themed discovery centres. Also worth a look is the revamped Museum of Wellington City and Sea, which charts the city's development, Maori history and seafaring traditions.

Get a panoramic view of the city and harbour, along with great photo opportunities, at the Mount Victoria Lookout. Another lookout is at Kelburn, which you can reach by riding on the historic Wellington Cable Car from Lambton Quay. The northern end of Lambton Quay marks the start of the Parliamentary district, dominated by the grandiose Old Government Buildings, which were completed in 1876 and remains the largest wooden building in the southern hemisphere.

Wellington's waterfront is a beautifully walkable public space, dotted with cafes, parks, sculptures and bars, while locals can be seen jogging, skating and cycling. Stop by one of three markets on the weekend before wandering to Oriental Bay beach for a swim or to just sit and soak up the sun. The natural environment can also be enjoyed on a harbour cruise or perhaps hiring a sea kayak and paddling around the picturesque bays.

Wellington is also the capital of New Zealand's film industry, which is increasingly centred on the Miramar Peninsula. This stunning natural setting has been used for numerous films including Lord of the Rings, King Kong and Hobbit films. Tours depart regularly to local locations used during film of The Lord of the Rings trilogy and are a must for any fan.

The city is full of fashionable stores and boutiques, centred around Cuba, Willis, Victoria, Wakefield and Featherston Streets along with the Golden Mile on Lambton Quay, regarded as the main shopping strip with international chain stores and brand names aplenty. Supposedly home to more cafes, bars and restaurants per capita than New York, Wellington is also known for its lively nightlife and world-class culinary scene. It's also become the hub of New Zealand's craft beer revolution, with experimental breweries and specialist bars popping up all over the city.

Call and speak to one of our travel experts who have experienced Wellington personally.

Wellington is approximately 27 hours from the UK (including a stopover).

Being close to the sea keeps temperatures mild. In summer the maximum averages are around 19ºC to 24ºC, so lovely to be out in. While winter temperatures can drop to around 6-9ºC, frosts are rare, although it can be windy at certain times of the year. 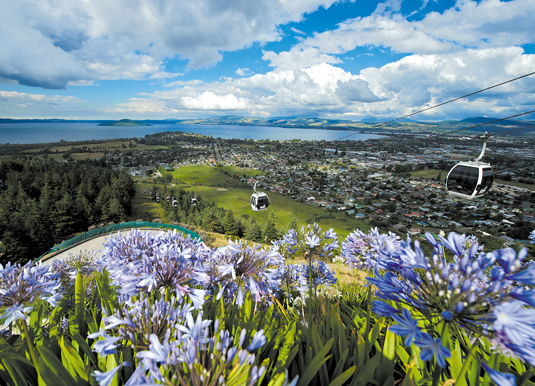