There are few places in the world where you can sit on a beach and view snow-capped peaks, but this is certainly one of them. Add to this, crystal clear, shimmering fiords where steep cliffs reach up to iridescent blue skies, deep undergrowth which opens out to dramatic vistas of sea, mountains and the long white cloud clinging to distant hills and you have a snapshot of a destination which promises much and delivers more.

The largest city on South Island is Christchurch and a must on any itinerary. The city is the gateway to the island and has bounced back after the earthquake of 2010 with innovative new attractions as well as some old favourites. Also on South Island is New Zealand's adrenalin city, Queenstown, which sits on the shore of Lake Wakatipu and is home to all manner of adventure activities.

World Heritage listed Fiordland National Park is one of the most striking and beautiful parts of New Zealand. Carved by glaciers over 100,000 years the landscape is one where waterfalls cascade into deep black fiords, where ancient untouched rainforest clings to mountains and where shimmering lakes and granite peaks look as they did a thousand years ago.

Further up the west coast are the breathtaking expanses of Fox Glacier and Franz Josef Glaciers, which are not to be missed. Half an hour apart in the Westland Tai Poutini National Park, it's an easy walk to the foot of both glaciers and not long before you feel like you've entered another world. Another wonderful natural splendour is Aoraki Mount Cook National Park, home of the highest mountains and the longest glaciers. It is alpine in the purest sense – with skyscraping peaks, glaciers and permanent snow fields, all set under a star-studded sky.

In the north, Picton is the arrival point for those travelling by ferry across the Cook Strait. South of Picton is Marlborough, New Zealand's largest wine growing region while Marlborough Sounds is a collection of secluded bays and enjoys the most sunshine hours in the entire country. The northern section also includes the lively yet relaxed city of Nelson, famed for its arts and crafts; Abel Tasman National Park, which has some of the country's most gorgeous walking trails and dazzling golden beaches; and the quaint town of Kaikoura, where you may spot sperm whales just a few miles off shore.

The south eastern corner contains some of the least-visited parts of New Zealand including the harbourside city of Dunedin. Surrounded by dramatic hills, Dunedin is one of the best-preserved Victorian and Edwardian cities in the southern hemisphere and ideally located for the phenomenal wildlife of the Otago Peninsula. New Zealand's southernmost city is Invercargill, which is full of character while just off the southern coast is Stewart Island, which is known for its extraordinary birdlife.

Additional scenic highlights of South Island include Arthur's Pass National Park which offers various walking, climbing and skiing opportunities; Lake Wanaka, which is the most tranquilly set of the South Island lakes; and Punakaiki, where columns of water shoot skyward from rocks that resemble giant stacks of pancakes.

Call and speak to one of our travel experts who have experienced South Island personally.

Christchurch is approximately 26 hours from the UK (including a stopover). Key areas on the island have domestic airports or are within an easy drive.

There really isn’t a bad time to visit South Island, although there is a far greater seasonal difference than on the North Island. In winter temperatures can get as low as -10ºC while summers can experience temperatures as high as 40ºC. The west coast of South Island has the island’s highest rainfall. 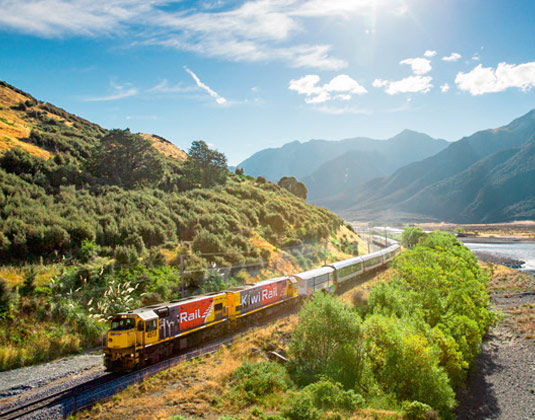 Step aboard the TranzAlpine and experience the South island’s striking natural landscape on a journey between Christchurch and Greymouth. Along the way you’ll see epic vistas, travel the edges of the ice-fed Waimakariri River, traverse the Southern Alps and see miles of native beech forest.Your comfortable reclining seat has panoramic views through large windows which bathe the carriage in light. On board also is a licensed cafe and fantastic open-air carriage. Journey also available in reverse. The one way journey takes just under 5 hours, while the full day trip includes an hour in Greymouth before you rebound the train back to Christchurch. Available daily from Christchurch. 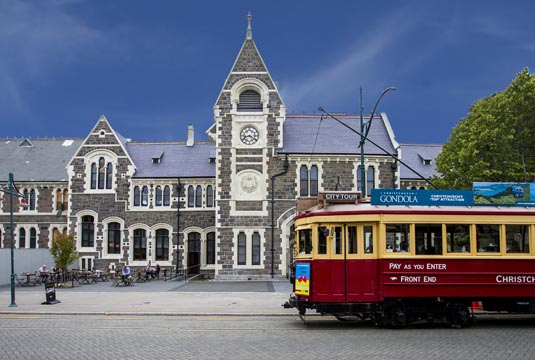 Board a coach for a fun and informative 3 hour tour of Christchurch, which covers the central city highlights including the botanical gardens, Museum and Art Centre, the Avon River and the city’s transitional cardboard cathedral as well. Continue to Mona Vale, a historic homestead and gardens, soak up the views across the Canterbury Plains through the Southern Alps, then over the Port Hills to Lyttleton and the seaside suburb of Sumner. Available daily from Christchurch (excluding 25 Dec). 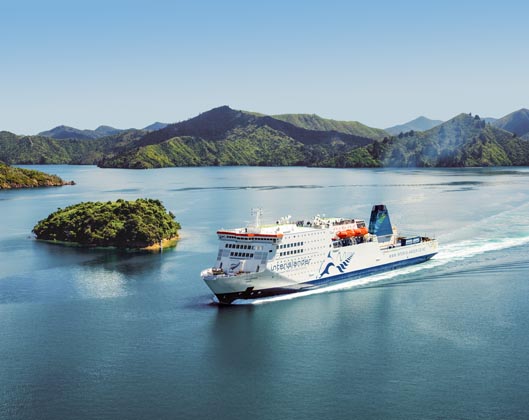 The Interislander ferry is one of the unmissable great journeys of New Zealand, as it sails between Wellington and Picton. It’s a truly iconic experience. There is the option to travel as a foot passenger, with upgrades available to the Plus Lounge for a more refined journey. There is also the option to travel with your car (some car rental companies require you to drop your vehicle off and pick up another on arrival). Each vessel has stacks to keep you busy with a family lounge, a cafe and bar. Journey is available in reverse. Wellington (North Island) to Picton (South Island) takes around 3½ hours. Three ferries depart daily from both Wellington and Picton with departures throughout the day.

From £47 (Wellington to Picton one way) 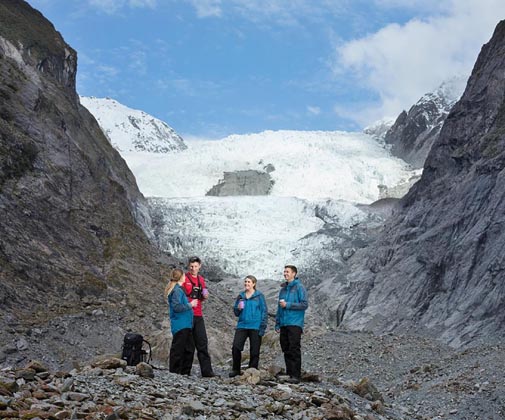 The three hour Franz Josef Glacier Valley Walk will take you at a leisurely pace up alongside the mighty Waiho riverbed, following the glacier’s path as it winds its way through remarkable landscape. Here, you will learn about the glacier’s history and see what this majestic giant leaves behind. After a brief climb you will be rewarded with spectacular views of the glacier’s rapidly changing terminal face. Available daily from Franz Josef (excluding 25 Dec). Please ask for details of other restrictions. 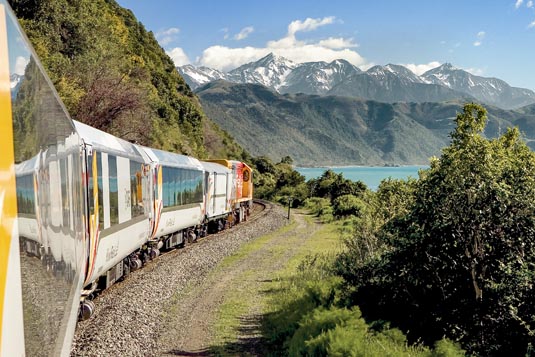 With the Pacific Ocean lapping at its wheels on one side and the Kaikoura ranges rising majestically on the other, the Coastal Pacific is undoubtedly one of the most astonishingly beautiful journeys in New Zealand. Your comfortable reclining seat has ample leg room and the carriage has panoramic windows for soaking up the views. Otherwise, head to the open-air carriage to step outside and feel the ocean breeze brush your skin, or sit back with a refreshing drink in the licensed cafe. All journeys are available in reverse. Christchurch to Picton takes just over 7 hours; Christchurch to Kaikoura is around 3½ hours; Kaikoura to Picton is just under 4 hours. Departures available daily between late Sep-late Apr. 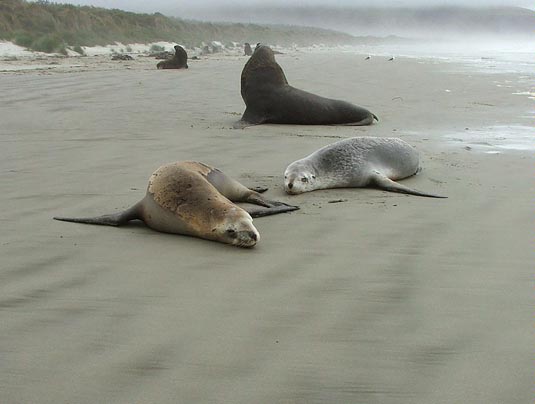 This 6 hour tour is a memorable wildlife experience with a unique insight into some of the world’s rarest wildlife. Travel the length and breadth of the Otago Peninsula, one of the world’s few untouched areas, with amazing wildlife and spectacular scenery. The trek enables close secluded viewing of up to 25-30 species of marine and wading birds as well as penguins and New Zealand fur seals. Available daily from Dunedin (excluding 25 & 31 Dec) 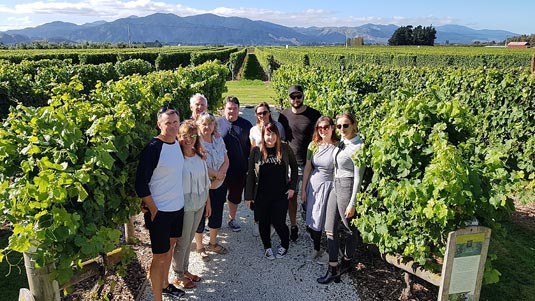 Immerse yourself in the heart of the vineyards on this half day tour. You will be collected and taken on a tour through Marlborough wine country to visit four wineries. Sample the best the wineries have to offer and learn some of the secrets of fine wine appreciation, with ample time to wander in the vines. Available daily from Blenheim (excluding selected dates). Luxury and Private Marlborough Wine Tours are also available. Please ask for details. 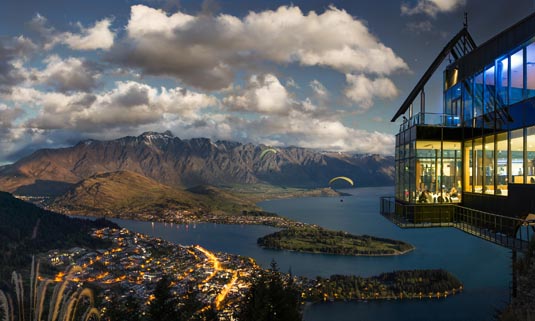 Take a scenic gondola ride for quick and easy access to Queenstown’s most amazing views as you ascend to the Skyline complex on Bob’s Peak. Here, you’ll enjoy a tempting New Zealand buffet in a relaxed atmosphere. The restaurant has tiered seating and floor to ceiling windows guaranteeing views from every table. Finally, explore the Milky Way and neighbouring stars, nebulae and clusters. Available every evening from Queenstown. 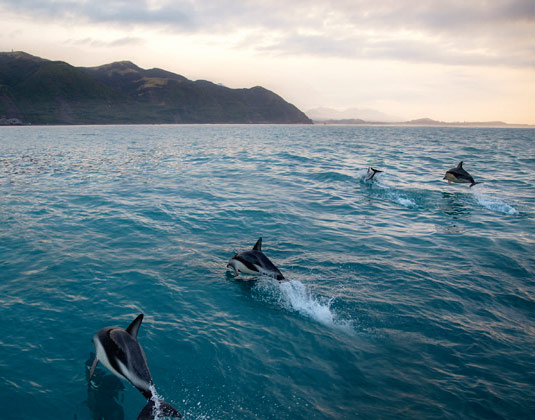 Every whale watch tour is unique and sightings vary.  Giant sperm whales are the stars of the show and year round residents. A typical tour may also see New Zealand fur seals, pods of dusky dolphins and the endangered wandering albatross. Depending on the season you may also see migrating humpback whales, pilot whales, blue whales, southern right whales and orcas. There is also a large concentration and variety of seabirds. Available daily from Kaikoura (excluding 25 Dec). 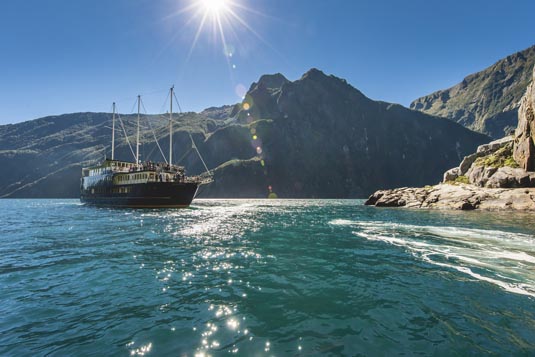 Travel by coach through impressive alpine scenery to Milford Sound. Board the nature cruise vessel for a leisurely cruise the full length of the fiord to the Tasman Sea. Explore points of interest and view the spectacular alpine scenery including waterfalls, rainforest and the towering peaks whilst keeping a lookout for wildlife including seals, dolphins and penguins. Available daily from Te Anau or Queenstown. 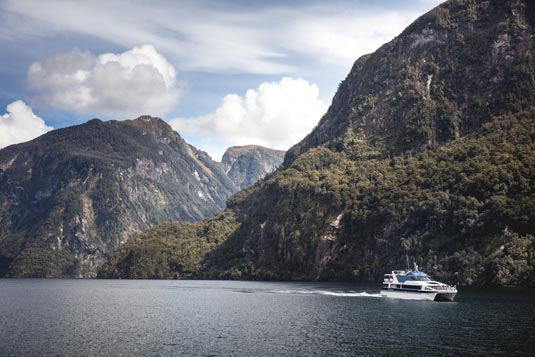 This full day tour starts with a trip along the shores of Lake Wakatipu to Manapouri. Cruise across Lake Manapouri to West Arm, then travel by coach over Wilmot Pass through some of Fiordland’s most dense rainforest. At Doubtful Sound, enjoy a three hour cruise on the serene and isolated Doubtful Sound. See waterfalls, rainforest, mountains and wildlife, such as fur seals and bottlenose dolphins. On the return journey, the engines are turned off and you are treated to the ‘Sound of Silence’. Available daily from Queenstown. 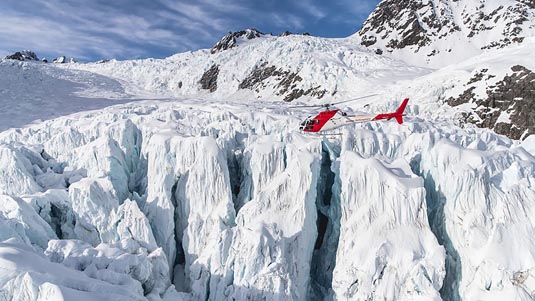 This 30 minute helicopter tour gives you the opportunity to fly over two of New Zealand’s most famous glaciers and marvel at the mantle of pure white snow as you land at the head of either the Franz Josef Glacier or Fox Glacier. The landing site is the perfect place to view the incredible natural phenomenon of the glaciers as they wind slowly down the carved valley. Experience incredible close up views exposing the extraordinary colours of the ice flow, ice caves and pinnacles in this largely inaccessible alpine region. Available daily from Franz Josef and subject to weather conditions. 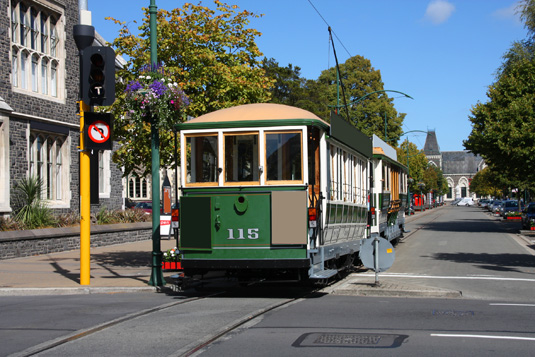 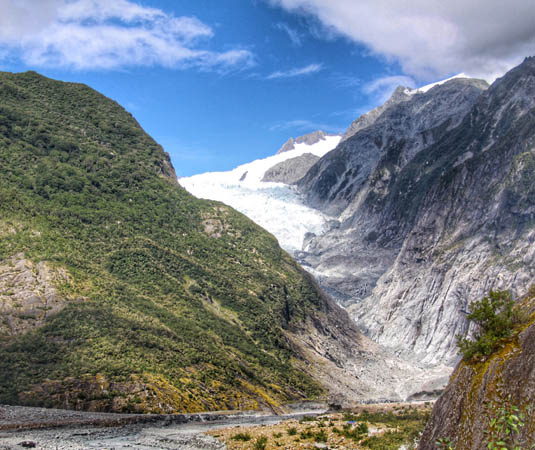 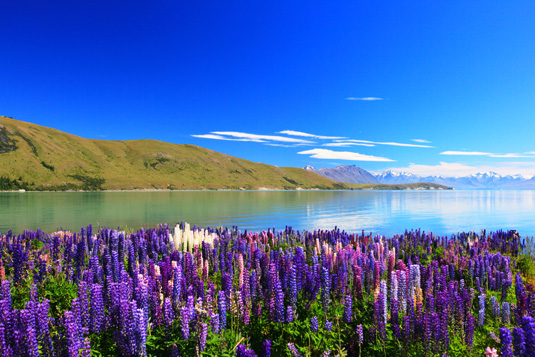 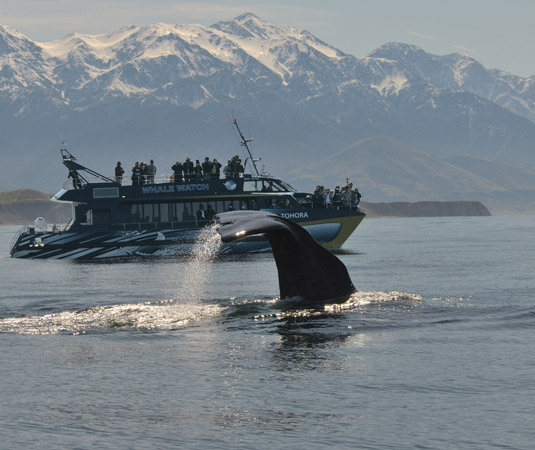 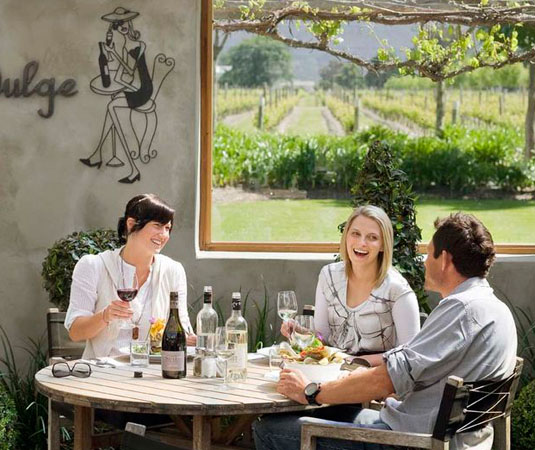 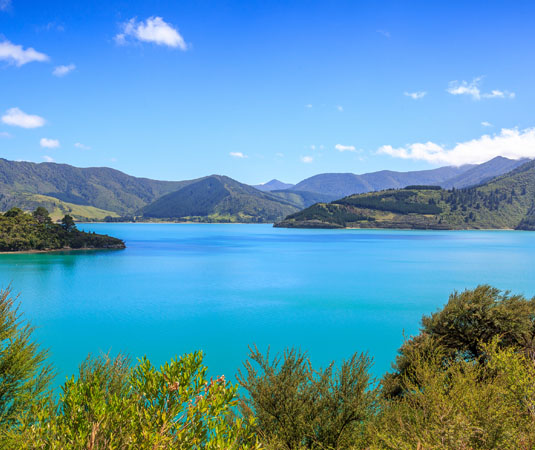 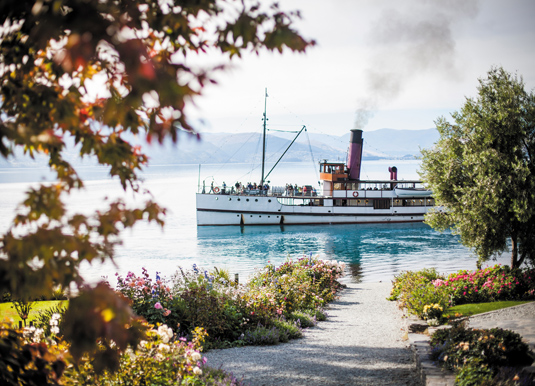 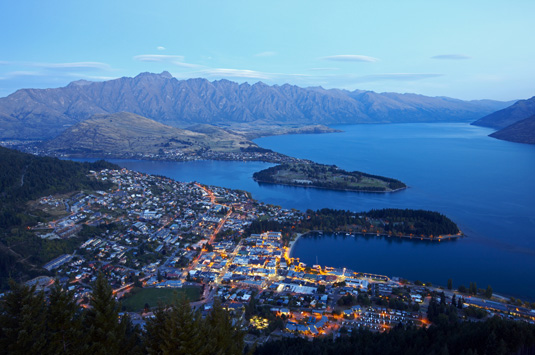