Lying northeast of Mahe, the second-largest island in The Seychelles falls somewhere between the relative hustle and bustle of Mahe and the sleepiness of La Digue. Praslin is a granite island, with a ridge of small mountains running through the centre, tangled velvet jungle, curving hills dropping to crystal-clear seas and gorgeous expanses of soft white sands fringed with swaying palms.

Praslin has three main settlements, Baie St Anne which has the terminal for the inter-island ferries for Mahe and La Digue; Grande Anse on the south coast which is near the airstrip; and Anse Volbert on the north coast. Between these main towns the island is sparsely inhabited so it's all too easy to imagine you are own your own piece of private paradise.

The dreamy beaches around the island are all picture-perfect with white sand and shallow, turquoise seas. In the north west of the island is Anse Lazio, often hailed as 'the best beach in the world' and with half a mile of sugary soft sand and incredibly clear water it's not difficult to see why. Also not to be missed is the outstandingly beautiful Anse Georgette, a gloriously untouched and attractive expanse of sands, however swimming is not always possible due to strong currents. Nearby Anse Kerlan is a charming little cover with gentle waters and some great snorkelling around the rocks, while equally lovely beaches include Anse Bois de Rose, Anse Petite Cour, Anse Cimitiere and Anse La Blague to name just a few.

No trip to Praslin is complete without a visit to the World Heritage Site of Vallee de Mai, the world's largest forest of coco de mer. Several nature trails run throughout it ranging from short hour long routes to longer circular routes which take around two to three hours at a leisurely pace. All six endemic palms of The Seychelles are found in Vallee de Mai along with the national bird, the Seychelles black parrot, which only breeds on Praslin. While they are difficult to spot, their piercing whistle can often be heard.

Praslin is also a great base for visiting several smaller neighbouring islands, some of which are important sanctuaries nurturing rare species of endemic flora and fauna. Watch the amazing birds on Cousine Island; meet giant tortoises on Curieuse; or discover the amazing underwater world around St Pierre.

Call and speak to one of our travel experts who have experienced Praslin personally.

From Mahe the Island of Praslin is reached by high speed catamaran which takes approximately 1 hour. Alternatively flights from Mahe take just 15 minutes.

Generally the considered best times to visit are March/April or October/November as the weather is most settled. June to September, though usually dry, can be very windy. 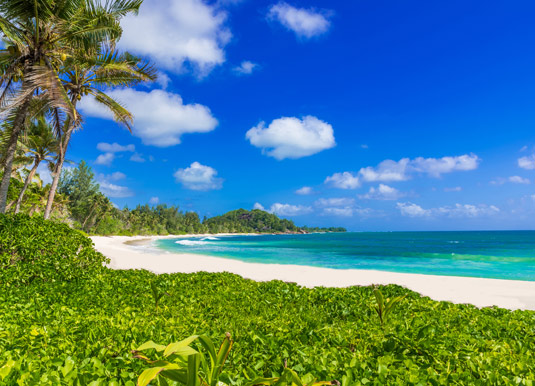