Where better to take in the grandeur of the Big Apple than from an observation deck, be it the Empire State Building, Top of the Rock, One World Trade Centre or Edge which is the tallest observation deck in the Western hemisphere and lies in the city’s newest neighbourhood, Hudson Yards. Alternatively, book a helicopter tour for a real bird's eye view of New York.

If you prefer to keep your feet firmly on the ground, take a stroll across the Brooklyn Bridge, an American landmark which stretches over the East River connecting Manhattan and Brooklyn. The walk takes about 40 minutes and delivers exhilarating views.

Once you’ve ticked off the skyline, the next big must-see is the Statue of Liberty. See this notable landmark from aboard one of the ferries that run from Battery in Lower Manhattan to Liberty Island and once here join a ranger-led island tour. Tickets for the statue’s pedestal or crown must be booked about 3-4 months in advance. At Ellis Island visit the Immigration Museum which tells the story of the millions of immigrants who have passed through in their quest for slice of the American Dream.

See also the High Line, a public park built on an historic freight rail line elevated above the streets on Manhattan’s West Side. And, don't miss the bright lights and giant billboards of Times Square. Big, bright and unforgettable, Times Square is a great place to people-watch, shop and eat. There's also a TKTS discount booth here, which offers up to 50% discount for tickets to many of the Broadway shows. No visit to New York is complete without experiencing a show on Broadway, be it a musical, long-running hit or fascinating drama.

Whatever your retail pleasure, you'll find it in New York. Where better to begin than Fifth Avenue, regarded as the city's premier shopping area, it's home to many flagship stores including Bergdorf Goodman, Lord & Taylor and Saks 5th Avenue. The 34th Street Shopping District has over 175 department stores, shops and boutiques including Macy's, while Soho Shopping District is where you'll find Bloomingdale's; the Greenwich Village Shopping District houses one-of-a-kind shops amongst the mainstream retail names; South Street Seaport is an historic spot with shopping, dining and entertainment; while Hudson Yards has 100 diverse shops and culinary experiences.

Call and speak to one of our travel experts who have experienced New York City personally.

The flight from the UK to New York City is around 8 hours npn-stop.

Spring in New York City brings light winds and rain with temperatures ranging from cool to very warm. Summer is characterised by bright, sunny, hot days and later sunsets, sometimes accompanied by cool breezes in areas near the water. Autumn is cool and crisp, so it’s wise to wear layers and the winter months are cold and snowy with less daylight, though the sky is often sunny and clear. 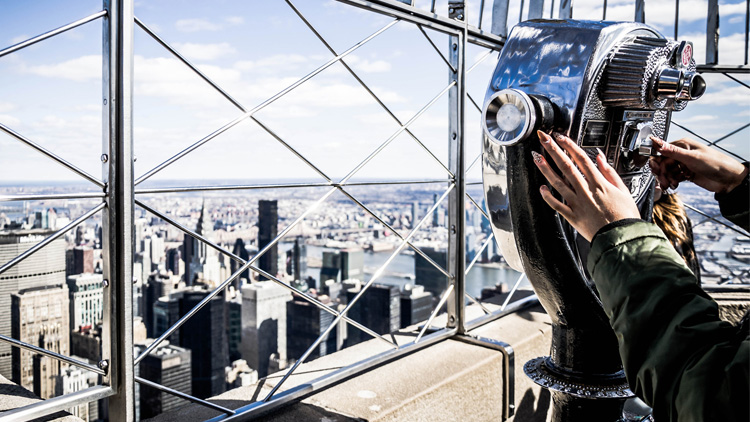 Journey through this Art Deco masterpiece to the 86th floor for panoramic Manhattan vistas, including Central Park, Times Square, Brooklyn Bridge, Statue of Liberty and more. 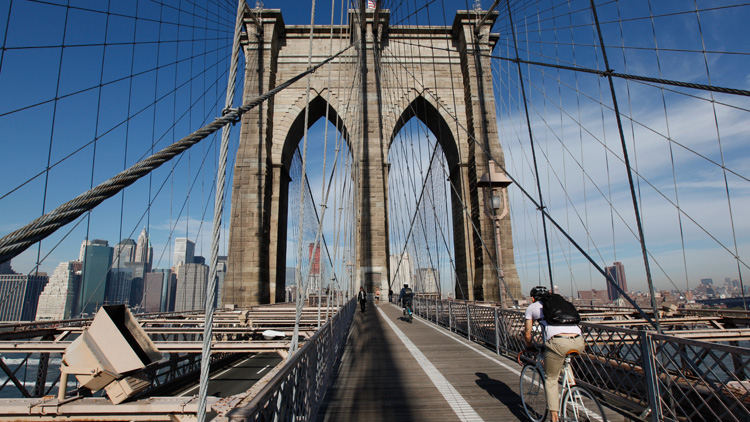 See New York’s best views on a two hour bike tour of the Brooklyn Bridge, cycling along a designated track above the cars. A low impact tour with an insight into local history and culture. 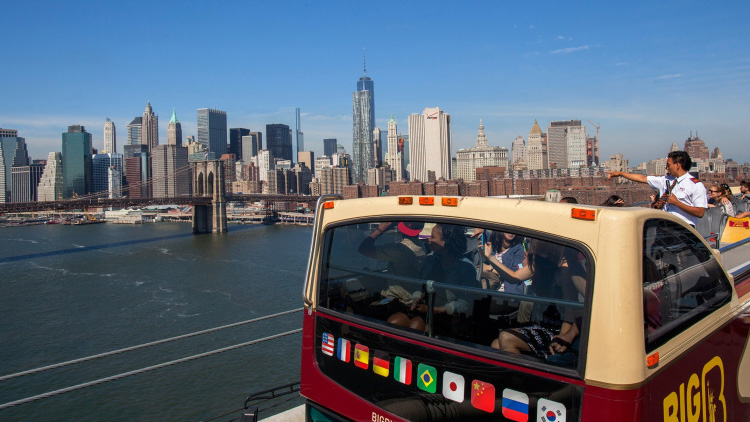 With two carefully designed routes and 14 different stops, you can soak up the famous sights of Manhattan on the Downtown and Uptown routes with this 24 hour pass. 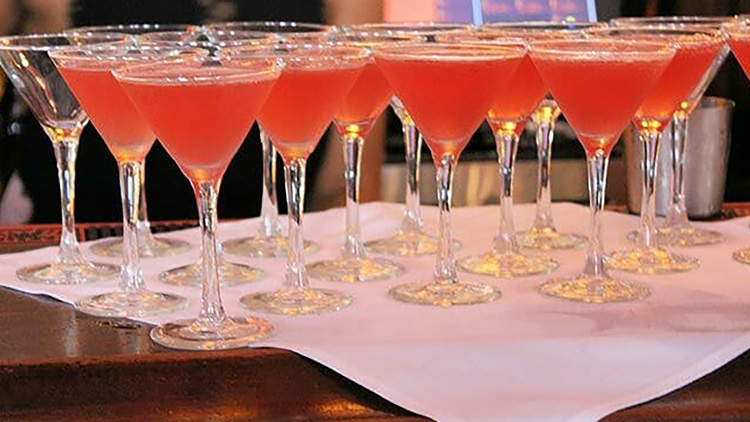 Sex and the City Hotspots

Follow in the footsteps of Carrie and Co on this fantastic tour across Manhattan that takes you to over 40 locations used for the ever-popular TV show, plus some locations from the film. 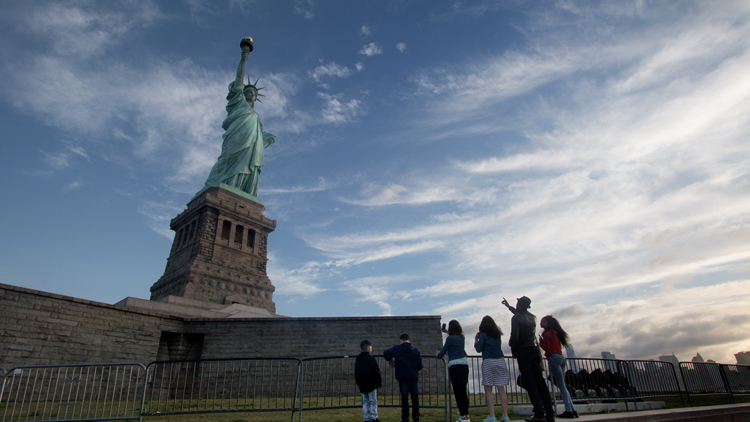 Start by meeting your guide at Battery Park for a 30 minute tour before a ferry trip across New York Harbour to Liberty Island. Soak up the views across to Manhattan before crossing to Ellis Island to learn about the immigrant experience at the Ellis Island Immigration Museum. 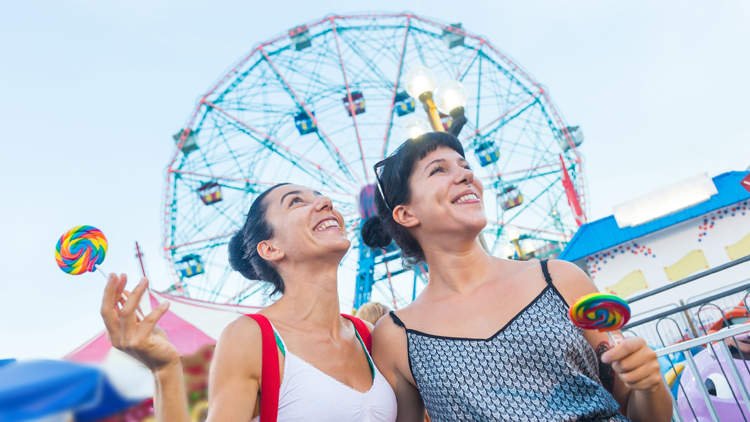 Get to know the less-explored boroughs of the Bronx, Brooklyn and Queens. Interact with locals to learn about Hispanic, Muslim, African-American and Jewish culture. You’ll also visit world-famous Coney Island and enjoy lunch at a local restaurant (not included). 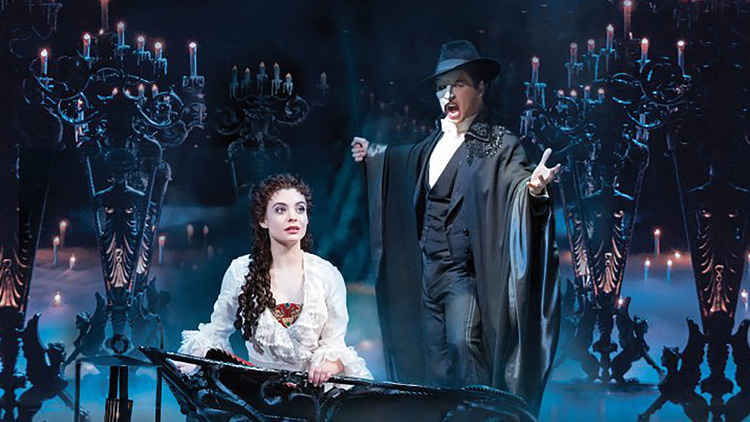 A Broadway show is an essential New York experience and it’s best to book in advance. Current shows include Chicago, The Lion King, Wicked, Jersey Boys, MJ The Musical, Phantom of the Opera and Moulin Rouge. 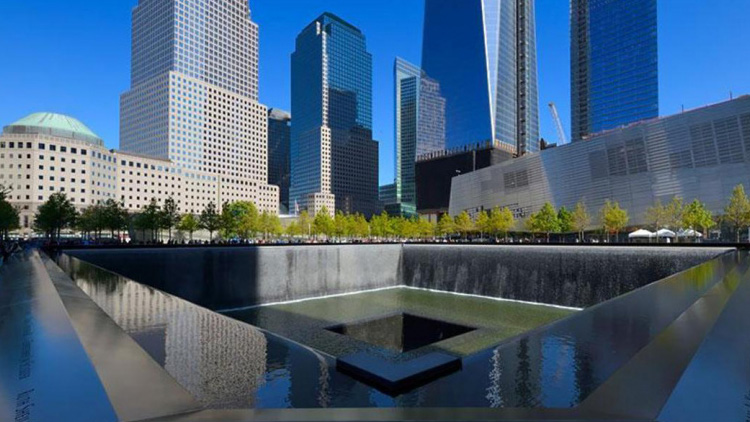 Valid for 9 consecutive days from first use with entry to 6 attractions: Empire State Building, American Museum of Natural History, The Met, Guggenheim Museum or Top of the Rock, Ferry access to Statue of Liberty & Ellis Island or Circle Line Sightseeing Cruise and 9/11 Memorial & Museum or Intrepid, Sea, Air & Space Museum. 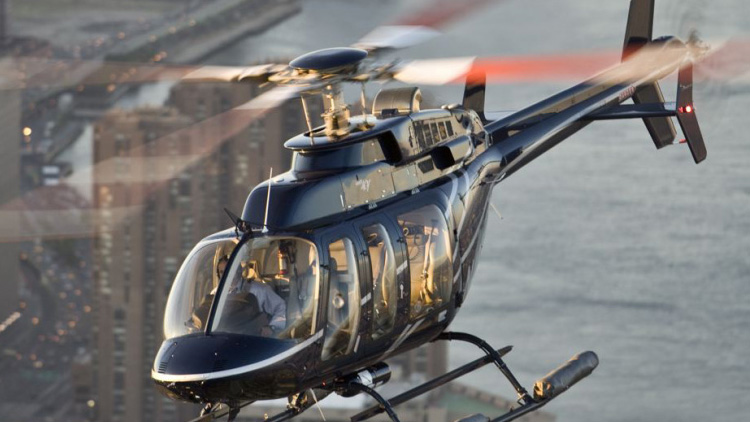 This breathtaking 12-15 minute helicopter ride offers a bird’s eye view of the Big Apple during which you’ll get a close up of the Statue of Liberty. It also includes the Brooklyn and Manhattan Bridge, Ground Zero, the Empire State Building and much more! A US$35 passenger handling and security fee is payable locally.