Day 1: Fly to Chicago. On arrival transfer to your hotel.

Day 2 Chicago: Chicago’s music history is firmly rooted in Jazz and Blues, but the diverse music scene offers a variety of genres as well as a thriving musical theatre hub and annual festivals. Perhaps take in a jazz or big band performance; see top acts at venues throughout the city, or enjoy eclectic line-ups and up-and-coming performers in the Wicker Park, Bucktown, Lincoln Park and Logan Square neighbourhoods. Away from music, notable sights include Navy Pier, Millennium Park, the views from SkyDeck or 360 Chicago and the shops along the Magnificent Mile.

Day 3 Chicago/Detroit: Collect your car and follow Lake Michigan’s spectacular shoreline to South Bend and on to vibrant Ann Arbor. Drive on to Detroit, known as “Motor City” and birthplace of Motown music. At the Motown Museum, view artefacts and see where Stevie Wonder and Marvin Gaye recorded hits, while jazz lovers can hear live music nightly at Cliff Bell’s, a legendary art-deco nightclub (281 miles).

Day 4 Detroit/Cleveland: Follow the shores of Lake Erie to Toledo where you can visit the Toledo Museum of Art. For a more daring outing, drive about an hour to Cedar Point Amusement Park for thrill rides galore. Continue to Cleveland, where the phrase “rock ‘n’ roll” was coined by a radio DJ (170 miles).

Day 5 Cleveland: Go inside the Rock & Roll Hall of Fame, browse the West Side Market, take a stroll in the Cleveland Botanical Garden or enjoy the Museum of Contemporary Art. This evening, perhaps visit venues such as Beachland Ballroom & Tavern or the Music Box Supper Club to discover the city’s vibrant music scene.

Day 6 Cleveland/Pittsburgh: Travel to Pittsburgh, which has a thriving music scene. The Cultural District has plenty of large concert venues as well as tons of festivals throughout the year, most with live music. Venues to see Pittsburgh’s newest up-and-comers include Brillobox, Park House and Club Cafe. For bigger shows, check out Stage AE, Heinz Hall or PPG Paints Arena (134 miles).

Day 7 Pittsburgh/Philadelphia: Travel through the Pennsylvania Amish Country to glimpse the horse- and-buggy lifestyle before reaching Philadelphia, the birthplace of the USA (304 miles).

Day 8 Philadelphia: See the Liberty Bell, visit the Independence National Historic Park or one of the
many museums along Benjamin Franklin Parkway. Musically speaking, Philadelphia’s rock, rap, jazz and pop venues showcase some of the world’s most talked- about musicians. Look out for free concerts at the outdoor Piazza at Schmidts in the Northern Liberties downtown neighbourhood or immerse yourself in local culture at one of the many outdoor festivals.

Day 10 New York City: Allow time to explore the city’s world-famous landmarks, enjoy some shopping and take a stroll in Central Park. Before you leave town, pay homage to John Lennon at Strawberry Fields, and visit the Apollo Theatre, the world-famous venue in Harlem.

Day 11 New York City/Boston: Travel onwards to Boston, which may be historic but not old- fashioned when it comes to music (215 miles).

Day 12 Boston: Wander along the Freedom Trail which passes many of the city’s significant sites and, if time allows, venture to the waterfront Seaport District for dining, lodging, breweries and a plethora of bars and pubs serving up live music. Catch big-name touring acts at a variety of venues or, tone it down with a classy night listening to the Boston Symphony Orchestra or Boston Lyric Opera.

Day 13 Boston: Return your rental car at the airport where the tour concludes with your onward journey.

Accommodation: In 3* hotels. Higher grade hotels are available at a supplement.

Tour price: The price shown for this tour is based on the best value travel dates in low season and includes international flights to Chicago and from Boston, 13 days compact 4 door car with fully inclusive insurance and 12 nights accommodation.

Great North Music Tour is also available with a motorhome rather than a car. The price shown includes return international flights to Chicago and from Boston, one pre-night at Ambassador Downtown Chicago and a C19 motorhome for 12 days. 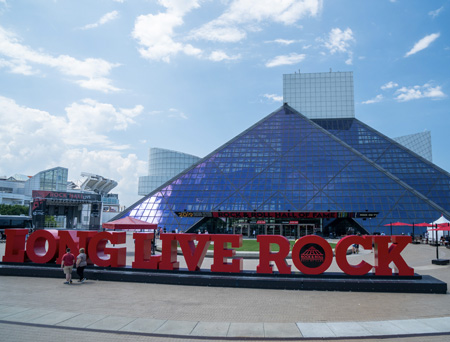