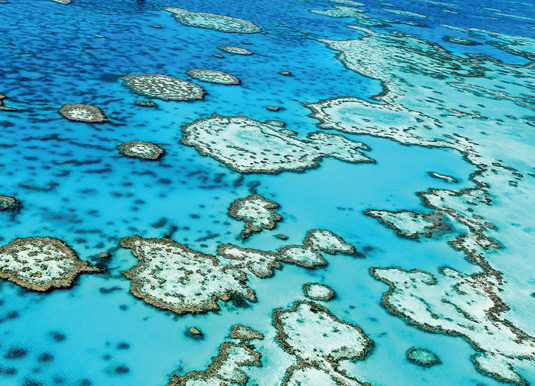 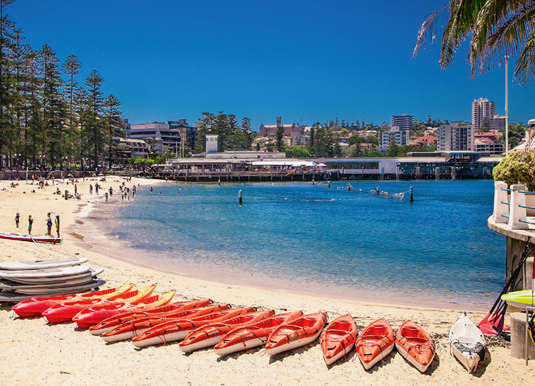 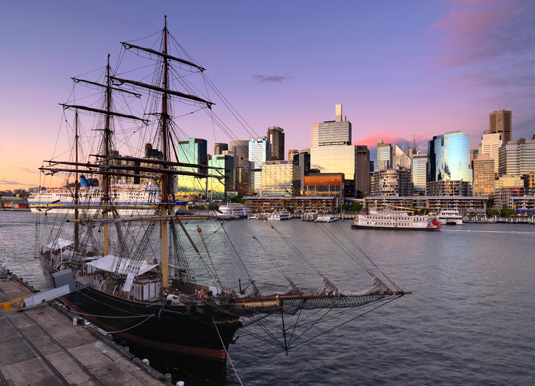 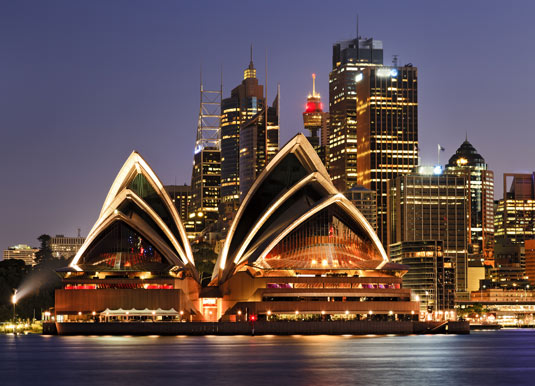 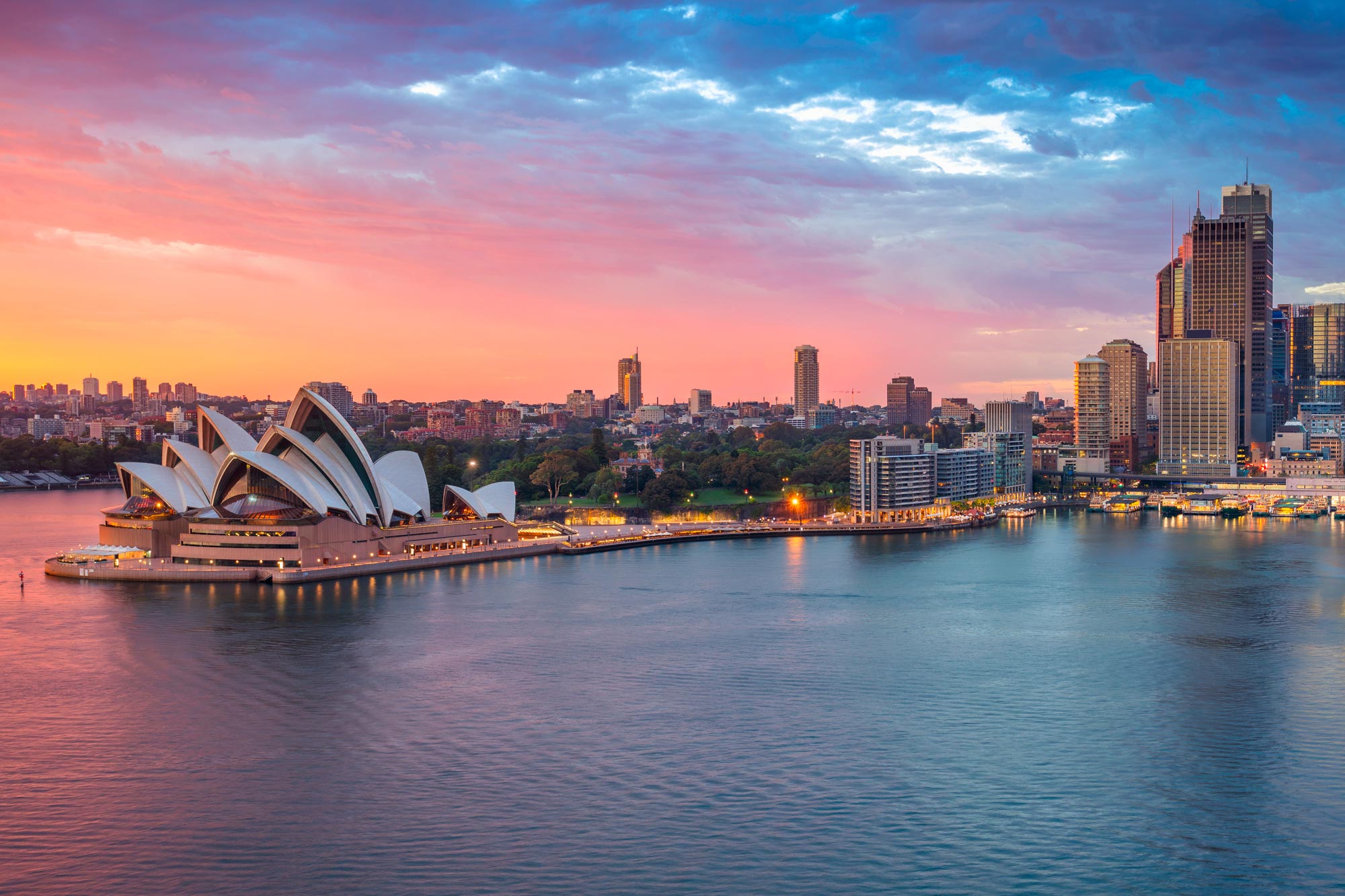 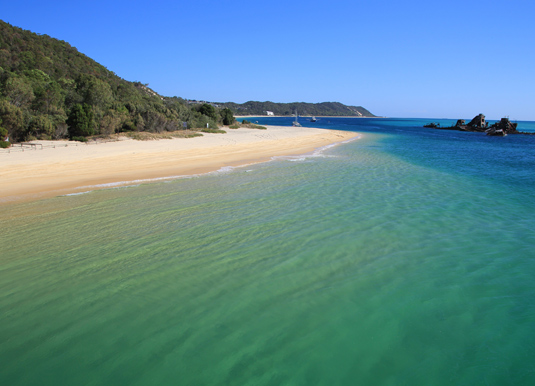 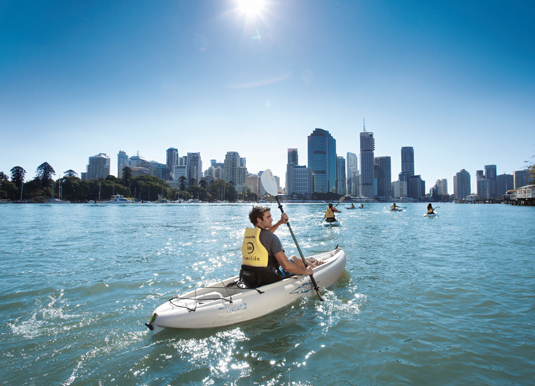 Kayaking on the Brisbane River 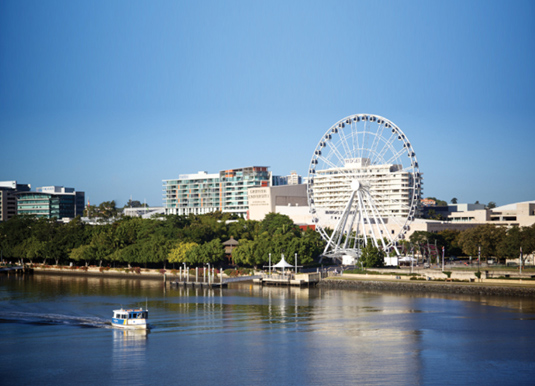 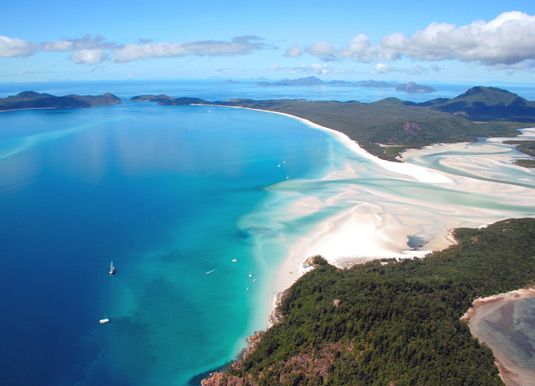 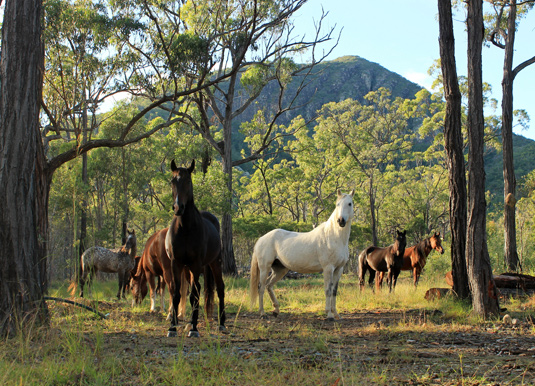 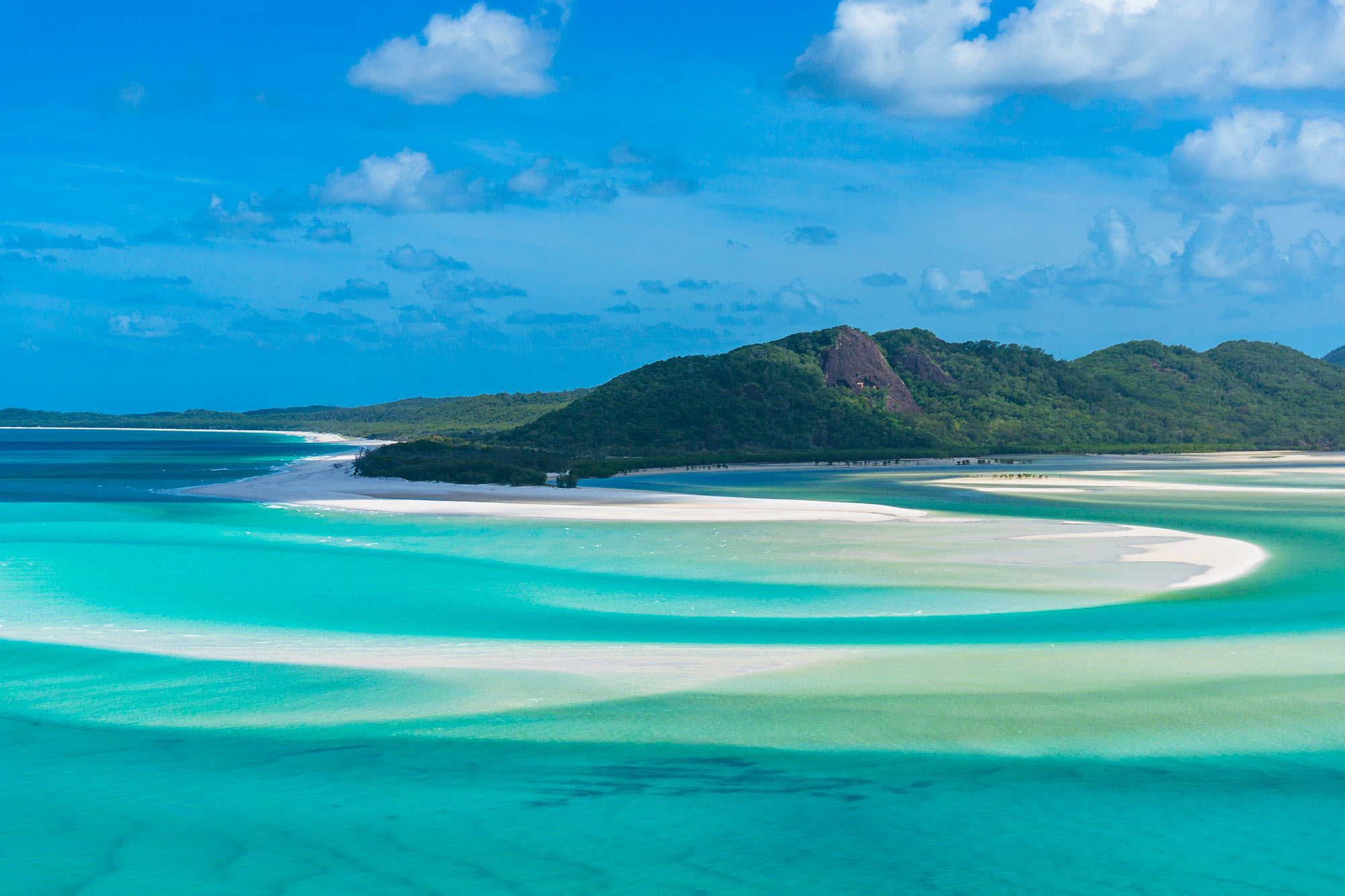 Travelodge Wynyard is ideally situated close to many of Sydney's wonderful attractions.

Royal on the Park Hotel & Suites is one of the city’s most iconic hotels. Perfectly situated next to the City Botanic Gardens and Brisbane River, in the heart of the CBD, Royal on the Park Hotel Brisbane is only a short walk to the Queen Street Mall in the City centre with easy access to Brisbane’s premier entertainment and sporting venues, such as The Gabba, Suncorp Stadium, QPAC and Brisbane Convention and Exhibition Centre at Southbank.

Flights to Sydney via Perth and onwards to Brisbane & Hamilton Island with Qantas, accommodation throughout, Boat transfers to and from Daydream Island and prepayable taxes. 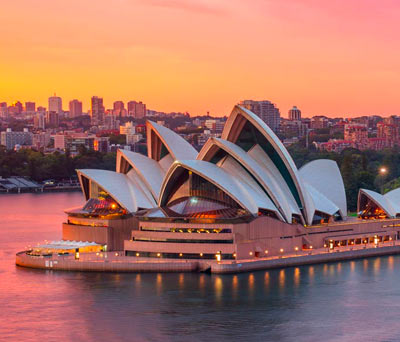 Seductively draped around its harbour and beaches, Sydney has a striking waterfront setting. Graced by the impressive steel arch of the Sydney Harbour Bridge and the pearly sails of the Sydney Opera House, the sparkling harbour is one of the world’s most photographed sites. Hop aboard a ferry or harbour cruise to best see these iconic landmarks or, if you have a head for heights, book a heart-pounding BridgeClimb.

Bustling Circular Quay, which is the launch pad for harbour ferries and sightseeing boats, throngs with visitors and locals alike who are drawn to the fabulous restaurants, cafes and bars. Adjacent to Circular Quay is The Rocks, once home to the Gadigal Aboriginals and then the first colonial settlers in 1788. Today this trendy area has over 100 heritage sites and buildings, many now housing a great selection of eateries, galleries and shops.

Further city attractions include the Royal Botanic Gardens, a true oasis in the heart of the city, home to an outstanding collection of plants from Australia and overseas; Hyde Park, which is Australia's oldest park and contains the ANZAC Memorial building and visitor centre along with nearly 600 mature exotic and native trees; Barrangaroo Reserve; Macquarie Street; the Sydney Tower Eye and its Skywalk, an alfresco glass-floored moving platform; and the award-winning Taronga Zoo, where admission includes daily keeper talks and shows and access to Sky Safari, Sydney's only cable car.

Also not to be missed is Bondi Beach and Manly for the chance to sink your toes into the soft sand, admire the bronzed lifesavers or sign up for a surf lesson. Further beach fun is up for grabs at Cronulla, Bronte, Coogee, Tamarama and Maroubra. 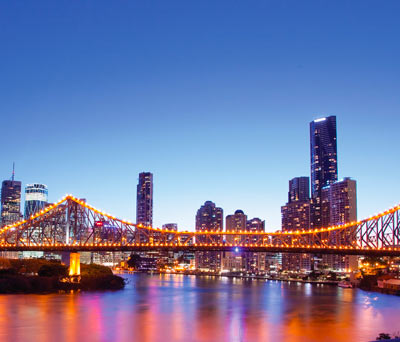 Delivering big-city attractions with a small-town feel Brisbane is a grand city bursting with life and colour. The capital of Queensland is one of Australia's most up-and-coming cities with glittering high rises, lush parks, historic buildings, an edgy arts scene, pumping nightlife, great restaurants, numerous outdoor attractions and an incredible array of annual blockbuster events.

A great way to get your bearings is to hop on a CityCat and take a cruise along the meandering Brisbane River. Get on and off wherever you fancy and acquaint yourself with the variety of landscapes and cultures of its individual precincts.

For panoramic views across the city consider the two hour guided Story Bridge Adventure Climb, with the option to abseil back down! Alternatively, head just four miles out of the city to Mount Cootha where on a clear day you can see the ocean at Moreton Bay. This area is also home to the Botanic Gardens and the Sir Thomas Brisbane Planetarium.

The picturesque South Bank is a riverside precinct filled with parklands, plazas, promenades, markets, bars, restaurants and Australia's only inner-city beach. South Bank is also the epicentre for the arts, with the huge Cultural Centre that includes a concert and theatre venue as well as three museums. Right next to this is the Gallery of Modern Art.

Queen Street Mall is Queensland's premier shopping destination with over 700 shops as well as a plethora of cafes. Other popular shopping haunts include Ann Street or James Street in Fortitude Valley where you'll find a mixture of boho chic and ultra-trendy style, while at South Bank Lifestyle Markets you'll find everything from local crafts to unique artworks.

Food and drink is taken seriously in Brisbane, be it tasty pub grub, a good coffee or exquisite fine dining. The pleasant outdoor climate and abundance of fresh produce allows for al fresco dining and menus brimming with locally sourced delights. Fortitude Valley has countless bars, clubs and restaurants, so deciding where to go can be difficult! The city also has numerous rooftop bars, live music venues, gastropubs, craft beer bars and much, much more.

Within easy reach of the city there's so much more to explore. Not to be missed is Moreton Island, where you'll discover spectacular sunsets, crystal lagoons and a variety of hiking trails; or World Heritage Listed Lamington National Park which gives you access to lush rainforest, waterfalls and walking trails. 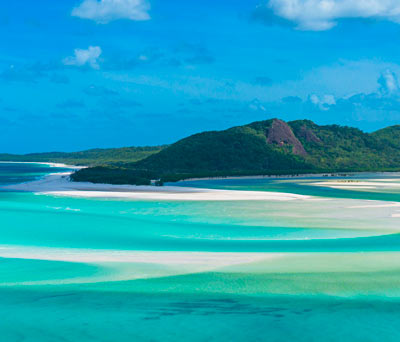 From its close proximity to the Southern Great Barrier Reef and its superb marine life, to coral-fringed archipelagos with picture-postcard beaches, Central Queensland and the Whitsunday Islands have something magical for everyone.

The Queensland Central Coast stretches from Hervey Bay to Mission Beach and is dotted with beachside resorts and towns including Bundaberg, which as well as the gateway to the Southern Great Barrier Reef has museums, gracious colonial buildings, Botanic Gardens and cruises along the Burnett River. Gladstone is a dynamic, modern city that basks in a sub-tropical climate with islands, waterways and beaches providing year-round water activities. Relaxed and elegant Townsville is home to 19th century architecture, a beautiful white sand beach, swaying palms, water parks and eateries. At Magnetic Island, take in the spectacular scenery on a trail walk before relaxing under a palm at one of the 23 beaches and bays, or head to fabulous Mission Beach which boasts nine miles of sandy beaches backed by the rainforest.

The 74 islands of the Whitsundays are located in the heart of the Great Barrier Reef. A true paradise with clear blue water, white powdery beaches and fringing coral reefs at their doorstep, a visit to the Whitsundays is a feast for the senses. The majority are uninhabited national park islands, but four offer a variety of resort accommodation, and on the largest island you'll find idyllic Whitehaven Beach, boasting brilliant white silica sand that is among the purest in the world.

With its gorgeous outlook over bays and islands, and the tropical feel of an island resort, Airlie Beach is regarded as the vibrant hub of the Whitsundays and the ideal mainland base for fun and adventure. Enjoy activities on the water and in the lush, green rainforest of the Whitsunday coast.

At the heart of Central Queensland is Rockhampton, a town of well-preserved old hotels and warehouses down by the river, with Quay Street listed on the National Estate's heritage register.

Also not to be missed is Carnarvon National park, where you can witness dramatic escarpments and narrow-sided gorges 27 million years in the making along with Aboriginal art and creeks filled with turtles, frogs ad echidna. Natural attractions appear to be on tap in the Mackay Region, from beach-lounging wallabies at Cape Hillsborough National Park to the shy platypus in Eungella National Park as well as numerous secluded beaches. Let's not forget Sandstone Wilderness, an area of outstanding natural beauty featuring unique sandstone gorges, water sculptured formations and significant Aboriginal art sites.

Where to stay in Sydney, Brisbane & Great Barrier Reef